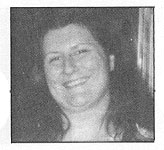 Diane Alfredhsson was born in Rockford, Illinois, USA in 1952. She considers herself equally American and Swedish, as she spent much of her youth on both sides of the Atlantic Ocean. She went to high school in the USA and after that gymnasium (Swedish senior high) in Tdby, Sweden. It was then, at the age of 16, that her first short story was published.

Diane had been a dedicated reader of Fantomen throughout her teenage years, and as she grew older and began to work as a writer, she decided to attempt writing Phantom stories. She contacted the editors of Fantomen and was given the opportunity to submit a script. Her first published Phantom story appeared in Fantomen Nr. 5/1983, for which Dianne adopted the pen-name "Dai Darell" -- a practice she would continue throughout her writing career. With this story, Diane became the first female Phantom writer ever (the second female writer appeared the same year -- Layla Gauraz from France). The story was called White Slave Trade, which was actually based on a true adventure from Diane's younger days when she and a girlfriend had been abducted and taken to a strange mansion in Frankfurt am Main. They managed to escape on their own but of course in her story, The Phantom leant a hand! Diane was even permitted to chose the artist who would illustrate her story, and it was a special thrill to chose her favourite, Kari Leppänen. 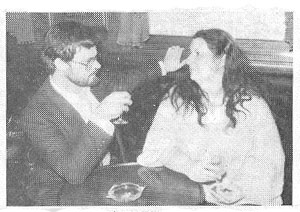 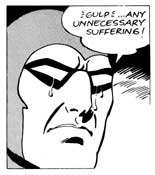 Diane quickly proved to be very popular with the Fantomen readers. Her third story The Mysterious Well was voted Best Story of 1983 by the readers of Fantomen magazine. It was illustrated by another newcomer in Team Fantomen -- Hans Lindahl -- who had debuted in Nr.4/1983 and this was only his second Phantom story. Diane wanted to bring more emotional content to the Phantom and the story Hero's Sentence (also from 1983) dared to show the Phantom with tears in his eyes (see right). Other memorable stories include The Snake Ring (sequel to the aforementioned Hero story), The Devil's Smoke and the two-part The Floating Island / The White Rider.

In 1984, Diane met Claes Reimerthi at a local meeting of the Swedish comics society. She inspired him to start writing Phantom scripts, gave him a foot in the door with Ulf Granberg, and coached him along - they even rented an office together for a while. Had it not been for Diane, Claes might never have become one of the most prolific Team Fantomen writers ever. But first, Claes and Diane began to write stories for the back-up strip Ödeshandsken (The Glove of Destiny). This was originally a British strip produced by IPC and published in Fantomen in the 1970s, about a magic glove that brings justice to whomever wears it. The strip was very popular, and when all material from IPC had been published Semic began to create their own stories. Six episodes written by Diane were published in Fantomen from 1983 to 1986.

Diane also worked with Mats Jönsson on writing an album story that was never finished. However, she did introduce him to Ulf Granberg and eventually Mats became editor of Fantomen (1987-90) and other Semic titles, as well as writer of The Phantom and Tybalt.

Diane quit Team Fantomen in 1986 due to family commitments and differences of opinion on future directions for the Phantom. Although her time on The Phantom was relatively short, lasting only 3 years, she still had a dramatic and long-lasting impact on Team Fantomen. Diane's 16 stories were a breath of fresh air, and two decades later they are still fondly remembered by Phantom fans everywhere.

Both during and after her tenure as Phantom writer, Diane kept busy writing stories for several magazines and publishers. Magazines she wrote for include Starlet, Min Häst (My Horse), Goliat, Tom & Jerry, Pellefant, Wendy and Disney comics for what is now Egmont in Denmark. After her comics writing career she was also president of an advertisement company called Daicomics.

In 1997, Diane met Carola Haglund on a mailing list for writers. They started to exchange stories and soon decided to write books together. A third writer, Jesper Svensson, joined the group and they adopted the pen-name "Saga Borg". Their fantasy book series Jarastavens vandring (The Staff of Jara) began in 2000. It is a historical series of the pre-viking days of Scandinavia and the wise old women who were like medicine-women of the smaller northern tribes. The series has been very successful in Sweden and Denmark, and five books have been published so far. One more is finished, and a deal for three more books in this series was signed in June 2003. Some English samples of the first book can be read here.

Using a different pen-name, "Teo Troy", the trio started another fantasy book series called Den svarta kristallen (The Black Crystal) in 2002. This series is now finished and consists of a total of eight books. Jesper Svensson left the group after the first four Black Crystal books and the first three Jara Staff books, but Diane and Carola have continued under the same pen-names. 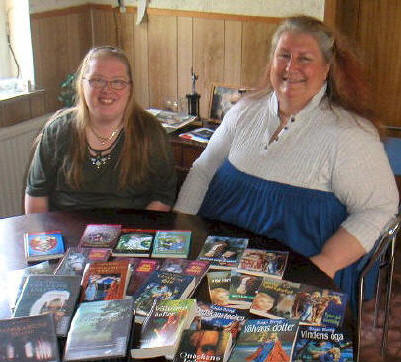 In 2003, Diane and Carola started a third series, this time aimed at young horse-interested girls called Stallet Silverlyckan. This is the first book series they have written under their real names, with four books published to date. Two more are finished and will be published in the near future. Diane has also written four other horse books for the Pollux book club. These have been published in Sweden, Norway, Finland and Germany. Coming up next is a new book series entitled Svart Enhörning (Black Unicorn). Four books have been written but a release date is not yet set.

During her writing career, Diane has worked with 14 writing partners. All but one were beginners and amateurs who wanted a chance to learn the ropes of professional writing, although most of them ultimately did not last long in the writing business (Claes Reimerthi and Carola Haglund being the biggest exceptions, of course). One of these writing partners was Jörgen Ewers, who met Diane in 1982 and was very interested in the Phantom and writing. Diane agreed to let him in on the creative process when she wrote the story The Mysterious Well. He would be a "silent partner" and not contribute anything to the writing, but if he stuck it out and participated in the whole process she would give him co-writing credit. That he did (barely), and when the story was finished after several re-writes he was listed as co-writer although he was mainly an observer.

Her only professional writing partner was none other than Roderick "Rod" Thorp, a novelist who among many other things wrote the novel on which the movie Die Hard was based. In 1997, he and Diane began working on a book project together. They completed about one third of the book when Rod suffered a heart attack and passed away on 28 April 1999 (coincidentally on Lee Falk's birthday and in the same year Lee Falk died!). The project remains unfinished.

In June of 2003, Diane moved to Canada. Although she does not live next door to Carola Haglund as she did previously, she does not foresee any problems with their ongoing collaboration. They will continue working together via e-mail and phone and are determined to keep on working.

Diane emphasises that in order to succeed as a professional writer you need more than just writing talent. It requires a lot of discipline to get the job done. She usually spends eight hours a day, five days a week writing. A lot of it is boring rewrites, which are not very inspiring but are essential to the process. Many aspiring writers bow out when they realize that writing is a job just like any other. Diane has mastered this, and has many more stories to bring to the world.