The Seventh Print: The 20th Phantom 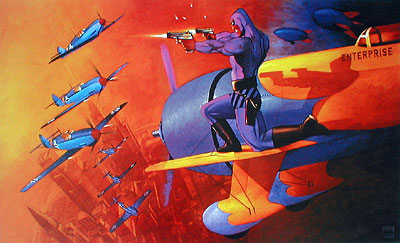 This print is released saturated with sadness. The portrait of the 20th Phantom is dedicated to the people whose lives were so dramatically changed on September 11, 2001. One hundred copies of the print (taken from the 400 export copies) are to be donated to the New York Fire Department. Hopefully, they will somehow make a difference to as many lives as possible.

This portrait of the 20th Phantom was designed and approved by King Features Syndicate a long time ago, in fact it was more than three years in the making. Ironically, the portrait shows The Phantom on the wings of a plane during World War Two, over the streets of New York being attacked by enemy planes. Early proposals actually featured World War One biplanes rather than the German Messerschmitt Bf109s that feature in the final painting. Given the events of September 11, Dietmar was in two minds as to whether to release the print or not. "Would people find it offensive? Am I being insensitive? Or, would the subscribers see this as it is intended as a positive piece of art that honours those who do what must be done no matter what the odds? A triumph of good over adversity, Art upholding Bravery. Everyday life can be a battle, we have to carry on, BUT, 'it's not always going to be this grey' ... there is always hope. If we look hard enough we can find Beauty, Love and the will to do good. These ideals are surely reflected in the workers, the volunteers, everyone who tries, regardless of Nation or Religion."

This leads to another tragedy, the death of George Harrison. The Beatles have been an important part of Dietmar's life, since his early childhood. If that is understood then the reason why he put George's words on the print would be clear -- to keep alive the memory of a talented musician in a way that is relevant to Dietmar.

Frantz Kantor is a talented Australian artist, well known as an illustrator for many established magazines and has built a reputation of being one of Australia's best political caricaturists. He describes his inspiration for this Phantom portrait and the techniques he used:

The image came to me in a dream, believe it or not! I often get ideas like these from problems I sleep on. The image of The Phantom in a pitched dogfight over the towers of old New York came first, and after talking to Dietmar about the period that this scene could fit into it kind of fell into place. The design of the idea came a little harder, and actually went through several stages or versions until I arrived at a solution that I felt expressed the action and drama of the painting the best. I've used a classic renaissance method of oil painting much akin to watercolour, where you establish a mid colour tone and bring elements forward sculpturally with highlights. Therefore, the thickest amount of paint is on the brightest parts of the painting. After establishing a blocking in of the elements, I then begin a series of glazes of transparent oil colour, continually pushing back the painting into the darkest tones and then bringing them forward with highlights. I continue with this method, drying in between, which takes several days or longer, until the painting becomes chunky or three dimensional. I usually, apply between 20 to 50 glazes to get the effect I want, though not always over the entire surface of the painting.

The painting was in progress when the terrible events of September 11 unfolded. The visuals Frantz witnessed had a strong effect on him, as they did to all others who saw them. It was inevitable that his Phantom portrait would be influenced by these events.

On September 11, my sister rang me at 3am to turn on the news. Something in her voice sounded so urgent, but sleep prevented me from understanding what it was she was saying. I wandered into the darkened lounge room, carefully measuring my footsteps so that I didn't collide with my still wet Phantom painting, sitting on an easel in the middle of the room. I fumbled for the light switch, found it, turned it on, then abruptly turned it off again when searing pain hit my eyes from the intense brightness overhead. I managed to grab the remote and pressed the 'on' button. The television came slowly to life, illuminating the room and I stood marvelling at the new colours playing over the surface of the painting. As my vision cleared and I was able to stare at the bright screen, what unfolded was a macabre scene from some apocalyptic nightmare. I thought of the end of the world, I thought of my children lying peacefully in their beds. The phone range again. This time I was awake when I heard my sister's voice on the other end. 'Yeah' I said 'I'm watching it now.' For a long time I couldn't say anything about what I was watching, I couldn't express any words. The whole story shocked me into a kind of dream state. I guess it's changed everyone who say it, and knows instinctively what it means.