Lee Falk was born on April 28 in St.Louis, Missouri, USA and died on March 13, 1999 in New York, NY, USA. The year of his birth was something which Lee consistently preferred to keep to himself. Many different birthyears have been reported in various books and magazine articles; anywhere from 1905 to 1917. It was not until he was laid to rest at the Frank E. Campbell Funeral Home in New York City on March 18, 1999, that the facts were set straight -- Lee Falk was born on April 28, 1911. Just to complicate the matter further, a press release from King Features after Lee's death stated his birthdate was April 12, 1911 - hence the incorrect birthdate given in Frew's obituary.

While at high school in St.Louis, Falk edited the school's paper. After graduation, he attended the University of Illinois, where he majored in literature and continued his interest in writing by contributing stories, articles and poems for the college newspaper. As a 19 year old sophomore (2nd year), Falk developed his first ideas for a comic strip centred around a stage magician. Considering it more a less a prank, he drew up the first two weeks of what was eventually to become Mandrake the Magician. He had always sketched and drawn a bit, had even taken art classes with an interested in comics, but thought of himself primarily as a writer. Lee did not think much of his first efforts at comic strip creation, but was advised to stick with it by fellow St.Louis resident named Harry Tuthill, who was the creator of The Bungle Family, a very popular comic strip at the time. Tuthill encouraged his young friend to try to find a buyer for his strip.

The first two weeks of the Mandrake strip were stockpiled along with other projects, until Falk found time during a vacation break to visit New York with his father. At this point in time, the young Lee Falk had visited only the eastern third of the United States and he had never been out of the country. He made the rounds of syndicates, publishers and stage producers, having decided to devote his talents to the whichever of his projects sold first. He brought with him several short stories, a couple of stage plays and the two weeks of the adventure strip which he had created. History tells us that the successful project was Mandrake the Magician.

Falk's first visit with King Features Syndicate officials was a memorable one. He was forced to wait an entire day in the office of the general manager, Joe Connolly, who had forgotten all about their meeting. Upon remembering the youngster, Connolly made amends by treating him to dinner at the Waldorf, followed by a Broadway play, and closing with the evening at the famous Stork Club where they chatted with celebrities. Falk was suitably impressed by the treatment King Features gave their people!

Now that he had sold Mandrake the Magician to King Features, Lee was committed to producing a regular daily strip. However, he was still at college and it would appear that a deal was struck whereby the strip would not commence until he had finished his studies. After working up ideas for the continuation of the strip, he decided that he could not keep up with drawing it himself so he approached an older artist by the name of Phil Davis (b. March 4, 1906), who was also from St.Louis. Falk recalls "he was a commercial illustrator who was a little tired of freelancing, and he agreed to illustrate the scripts which I would write while still in school. I guess I figured that when I got out of college I'd also do the drawing but things didn't work out that way." Davis continued to draw the strip until his death on December 16, 1964. 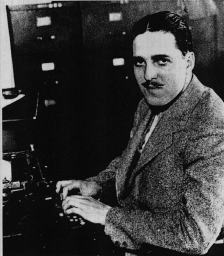 The Mandrake daily strip premiered on June 11, 1934, a matter of months after Falk celebrated his 23rd birthday. The central character was inspired by the great stage magicians of the era, such as Thurston, and by popular fictional detectives like Arsene Lupin and Sherlock Holmes. As a child, Falk avidly read the stories of Marco Polo, Richard Halliburton and other adventurers, as well as fairy tales, epics and legends from Europe and other parts of the world.

The name "Mandrake" was inspired by a poem written by the famous 17th-century poet, John Donne: "Goe, and catche a falling starre ... Get with child a mandrake root." Falk learned that mandrake was a herb (Mandragora officianarum), commonly used in ancient (and modern) naturapathy. He thought it was an interesting yet simple word which admitted of just one pronuncitation, the perfect name for his comic strip magician. The new strip proved very popular and in February 1935, a Sunday page was added. With this increased work-load, Davis hired an assistant named Ray Moore to help with some of the inking.

Despite the successes of the Mandrake strip, Falk did not "put all his eggs in the one basket." He spent three or four years writing copy for a St.Louis advertising agency of which he later became vice president. It was in this job that Falk received inspiration for the name of a new character in the Mandrake strip. While mulling over a pile of trade papers on his desk, he came across one from the National Association of Retail Druggists (NARD), and simply added an 'a' to the end which made Narda. Falk also directed radio shows and proudly recalls that experience: "Radio was a brand new business at the time, and I had the enormous studios of KMOX to work with. I did two or three shows a day over there, some using big orchestras, and it was like working with a stock company."

Soon after Mandrake began to appear in the newspapers, Falk thought of an idea for another strip ... The Phantom. He planned out the basic structure for the first few months of the story, and drew up the first two weeks himself. King Features Syndicate liked the concept and were quick to buy it. The Phantom daily strip commenced in American newspapers on February 17, 1936, a little before Falk's 25th birthday. While the costumed hero was by no means original in 1936, it was certainly new for one to be featured in the comic pages of newspapers. Masked adventurers such as The Phantom Detective had appeared in pulp magazines since 1933 and the idea of a masked avenger predates even Zorro.

The artistic duties for Falk's second strip were shared with Ray Moore, who was moved over from Mandrake. Falk continued to work on the layouts whenever possible, but his heavy workload with scripting daily and Sunday Mandrake strips, plus the new Phantom daily strip, combined with his commitments to radio shows proved too much. The artwork on The Phantom was soon left entirely to Ray Moore. A man named Eddie Walcher did the lettering on both Mandrake and The Phantom strips for many years.

The Phantom underwent some major changes during his first adventure. Falk explains "For the first few months, The Phantom was intended to be Jimmy Wells, a wealthy playboy who fought crime by night in a mask and costume. This was, of course, several years before Batman and Superman appeared on the comics scene. I never came out and actually revealed that the playboy was really The Phantom and in the midst of the first story I suddenly got the other idea. I moved The Phantom into the jungle and decided to keep him there. Gradually the whole concept of The Phantom developed; the generations behind him, the Skull Cave, his wolf Devil and horse Hero and the Bandar pygmies." Falk was a great fan of Rudyard Kipling's Jungle Book, and paid it homage by calling the Phantom's pygmy friends "the Bandar", which comes from the monkey tribe who were friends with Mowgli.

It took some time before Falk warmed up to the title he had selected for his new strip. "I tried to think up a more original title. There was already The Phantom of the Opera, the phantom of this and the phantom of that. For a while I considered calling him The Gray Ghost but I let it ride because I really couldn't come up with a title I liked better than The Phantom."

"The Phantom comes out of my great interest as a kid in hero stories, the great myths and legends - Greek, Roman, Scandinavian, the Songs of Roland, El Cid in Spain, King Arthur and others. There's a heroic thing about him, he's sort of a legendary character. He started out fairly simple and gradually I've added more and more legendary things about him till he has a whole folklore around him. The Jungle Book of Kipling's and Tarzan of the Apes influenced me, as you can imagine. Apparently this legendary quality seems to be the most popular feature of The Phantom with readers."

Despite the successes of both Mandrake and The Phantom, Falk was never confident that they would provide him with a long-term source of income. "I thought they might last a year or two because I was going for the theatre and for 20 years I ran 5 theatres and produced 300 plays, directed a hundred, and these were all professional Equity companies around the Boston area and also in Nassau in the Bahamas. That's why I didn't want to draw. I wanted to have time to write plays. I wrote about 12 plays, 10 of which were produced but not too successfully."

Falk was only in his middle 20's when he started a summer theatre and commenced writing plays. He has also written two musicals, Happy Dollar and Mandrake the Magician. The Mandrake musical was produced during the late 1970s at the Lenox Arts Festival in Massachusetts and was optioned by a New York producer. Unfortunately, King Features sold the film rights at that time which interfered with acquiring financial backing for a Broadway run. Lee Falk has produced over 300 plays featuring talents as Ethel Waters, Chico Marx, Marlon Brando, Ezio Pinza, and Charlton Heston. It is not surprising that he was so well-respected in the theatrical community.

A little over three years after The Phantom began in the dailies, a Sunday page was added on May 28, 1939. Falk was now committed to writing FOUR sets of continuity for his newspaper adventure strips. Several of the stories which followed in both daily and Sunday strips centred on tales of espionage and sabotage, reflecting the emotions of Americans who were not yet involved in the war which was raging through Europe.

The bombing of Pearl Harbour by the Japanese on Dec 7, 1941, changed things completely -- America was at war. Falk entered the Office of War Information and became chief of his radio foreign language division. Falk's sentiments towards the Japanese invaders were placed on open display with his uncharacterisically belligerent depiction of The Phantom in the daily strip story "The Phantom Goes To War."

In 1944, Falk joined the Army Signal Corps which promptly shipped him from one end of the country to another, north, south, east and west. Twelve times he was on the verge of going overseas; twelve times the orders were cancelled and he was sent to some other post. All the while he somehow managed to continue writing daily and Sunday stories for both Mandrake and The Phantom.