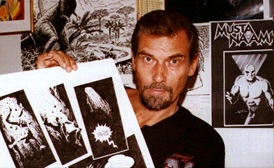 Kari Tapio Leppänen commenced work on his first Phantom story in 1978 for the Swedish magazine Fantomen, published by Semic Press (now Egmont). He has been a regular contributor of Phantom stories over the last 20 odd years, producing a total of 59 stories so far.

After receiving the script for a new story from Fantomen chief editor, Ulf Granberg, Kari has a very free hand to illustrate the story. During his 20 years with Semic / Egmont, he has met only one of the scriptwriters, Norman Worker, and has virtually no contact with any of the other writers. The scripts are usually written in English (Kari is Finnish and does not speak Swedish but can read it), and after reading through it once, Kari's first step is to plan the story in pages, deciding how many panels per page and their overall layout. He then begins with the first page, usually pencilling without the use of a rough. An example of a rough and a pencilled page is shown here. Once about 10 pencilled pages are completed, Kari then starts to ink them. This picture shows the types of pens and brushes that he uses for inking. In the past, the thinnest pen Kari used was 0.15 but this has now changed to 0.2, resulting in a noticeably heavier inking style. After the first 10 pages are completed, he then repeats the process until the whole story is finished. A Phantom story of 30 pages or so takes him about two months to complete. Kari typically works five hours per day, a little in the morning and then later at night, most days of the week. He can produce about one page per day, but there are times when deadlines are pressing and he can finish two pages per day. Despite this busy schedule, Kari has created several other adventure stories for Semic / Egmont, such as Xellana, Achilles Wiggen, and Death Game. He usually works on a couple of stories at the same time in order to make the deadlines and to maintain his interest.

Kari has taken on the role of scripting his own stories in recent times. The first story that he wrote entirely himself was The Ring of Death, published in late 1998. Some small changes to the script were made by Ulf Granberg, but it was essentially Leppänen's creation, and he is especially proud of his effort. Consequently, he was not too impressed when Frew did not give him credit for the script when they printed the story in #1211 and #1212. Obviously just a misunderstanding, but hopefully, Kari will not be too disheartened and will continue to script and illustrate Phantom stories in the future.

A complete index of all Kari Leppänen's Phantom stories is listed below in order of their first publication. The corresponding issue numbers for Fantomen (Sweden), Fantomet (Norway), and Frew's The Phantom (Australia) are included. Some stories have been reprinted in subsequent issues, but these details are not given. Story titles are translated from the original Swedish titles, and where different, the titles used by Frew are given in parentheses.

Many thanks to Kari Leppänen and Brian Jensen for their help with this research. Other sources of reference were Splasch Magazine (1997), Fantomet Serieindeks (1990), and the 50th Anniversary Frew Phantom Index (1998), in addition to my own collection.