The Fifth Print: The 15th Phantom 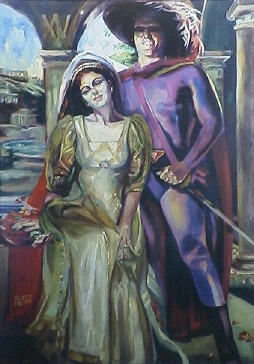 Rosemary Valadon is one of Australia's leading artists, and has won such prestigeous art awards as the Blake Prize and the Portia Geach. A keen opera lover, Rosemary has focussed on the 15th Phantom who married an Italian opera singer in Rome. The 15th Phantom succeeded his father in ca.1831, and so he was probably present in Italy at the time Vincenzo Bellini (1801-1835) was composing his famous operas. Indeed, there is some suggestion that Bellini might have actually encountered the Ghost Who Walks and was inspired by him! One of his most important operas I Capuleti ed i Montecchi (1830), was based on Shakespeare's Romeo and Juliet. Perhaps Bellini heard the tale of the 3rd Phantom who played Juliet on the opening night? The same opera speaks of " ... my son the valiant warrior ... who unites his destiny to mine ... " -- perhaps a hint of the father-to-son progression for the Oath of the Skull? And then there is Bellini's next opera La sonnambula (1831) which translates as The Sleepwalker -- perhaps a reference to the famous title of Ghost Who Walks? Coincidence or fact ... ?

Rosemary has a brilliant gift of being able to successfully meld the most extraordinary colour combinations, and this painting is a perfect example. Bruce James, a long-time phan of The Phantom who also happens to be the art critic for the Sydney Morning Herald, recently wrote: "Valadon is producing increasingly charged, increasingly expert paintings on the theme of self and self-representation ... if she chose, Valadon could whip up a rattling society portrait, a la Sargent, at the drop of an ostrich-feathered chapeau."

Note: It is worth observing that a different historical interpretation is taken in Scandinavia, where the 15th Phantom is said to have married Juliet Adams, otherwise known as Captain Amazon. Stories that originally mentioned the 15th Phantom marrying an Italian opera singer were re-lettered by Semic/Egmont to say that it was the 5th Phantom!