The Third Print: The 6th Phantom 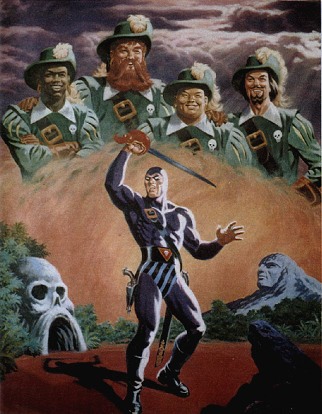 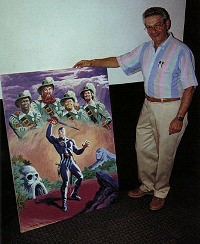 As many would already be aware, Dietmar managed to convince the legendary Sy Barry to prepare an oil painting for inclusion in The Phantom Portrait Gallery. In fact, Dietmar is responsible for bringing Sy and his wife Simmy over to Australia to help launch the print series at OZCON7 in Sydney. Apparently, Sy and Simmy were overwhelmed by the enthusiastic response they received from Phantom Phans wherever they went. Dietmar is hoping to bring them to Australia again in a few years time.

The third print of the series depicts the 6th Phantom in his 17th century costume with muscats in his holsters, emerging from the Skull Cave, and brandishing a sabre in the air. The 6th Phantom is remembered as the founder of The Jungle Patrol, and this aspect of history is commemorated by the painting. Behind The Phantom, perched in the clouds, are the first four commanding officers: (left to right) Major Bart, Colonel Redbeard, Major Crusher, and Major Salla ... all of them ex-pirates.

Sy Barry summarised his involvement in this project at his cocktail party, held at Customs House, Newcastle:

"When Dietmar called me for the very first time, many months ago, and began to relate this project of his to me I must admit I thought he was spaced-out!! He described 400 prints here, 400 prints there, 21 paintings here plus 4 paintings there ... 25 different artists ... I thought this was a prank! But as he continued, I actually began to believe him and then to like the idea ... thinking maybe the little green men will be calling on me soon! However, it didn't take long for me to realize the truly rational and wonderful concept it was. I soon accepted the commission to paint one of The Phantoms. Now to decide which one ... well, having drawn The Phantom for 33 years, one Phantom had to remain my favourite above the rest ... the 6th Phantom!!! The reason for this choice is because this story offered me the toughest challenges ... creating these four pirates that The Phantom challenges individually to duels. Big Bart, a duel with axes; Salla with blades; Cruncher [sic] with bare fists; and finally Redbeard with sword and dagger, defeating them all and offering them their lives. In return they had to serve him as their lieutenants in the newly formed Jungle Patrol. At the same time he was successful in rescuing Queen Natala of Navarre ... Redbeard's captive. Phantom falls in love with her and later in the story she proposes to him and with some encouragement from his lieutenants, he accepts. Working out the problems of illustrating the fight sequences between Phantom and his combatants was truly gratifying. It was with the feeling of nostalgia and excitement that I tackled this painting and enjoyed every brush stroke. Thanks, Dietmar, for giving me this opportunity, and Simmy and I want to thank you and Julia for your warm hospitality."

Sy's final oil painting is shown above, and to the right he is pictured with his work at OZCON7, 26/27 September 1998. At the bottom of this page is the watercolour version prepared prior to the oil painting. It's interesting to note some major differences between the two versions, such as the clouds behind the Jungle Patrollers and the design of their uniform, the dust-cloud and shadow behind The Phantom, and Phantom Head Peak in the background. 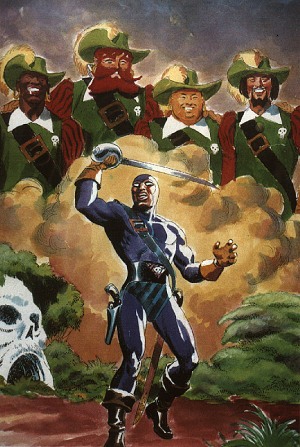