The Second Print: The 5th Phantom 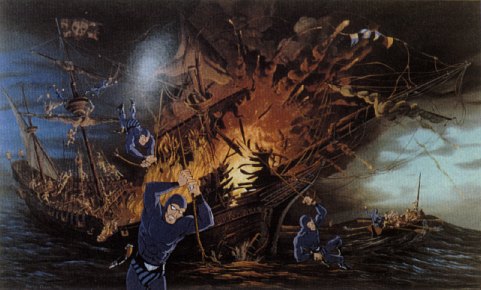 Here's Barry Dean's introduction and explanation for his print:

"As a member of the Sydney Maritime Museum, I have a love of timber boats - perhaps that is why I was tempted to depict the fifth Phantom fighting pirates on the high seas. Further, as a fulltime background painter at Sydney's Walt Disney Studio, it seemed appropriate to treat the artwork as if it were for animation.

"When laying out a panning background, (that is, a background that moves across the screen), often there are multiple vanishing points to more than one horizon line. In this illustration there are five separate perspective planes with a dramatic forced perspective running along the ship.

"In order to visualise this painting as if it were animating:

"The cause of the disturbance is now revealed. Pursued by pirates The Phantom is making a stand atop the mainmast. As he realizes he will soon be overwelmed, he decides its time to abandon ship. Leaping for the rigging, we follow The Phantom as he grabs a loose line and swings out beyond the gunwale. Behind The Phantom the pirates' galleon is well ablaze .... seconds later the forecastle erupts, sealing the fate of the ship and all aboard.

"A band of the pirates, anticipating the ship's imminent demise, have escaped in the ship's longboat. As the foremast collapses The Phantom swings in low over the water and drops onto the longboat's stem, thus escaping the doomed galleon and capturing the fleeing pirates ... his pistol ready to ensure their cooperation.

"With burning debris still falling around them, we notice a woman captive tied to the longboat's mast. Avid Phantom readers may recognise her .... she is Captain Amazon, the fifth Phantom's wife.

"So .... he has defeated the pirates and rescued his beloved in one swoop.

"As an animated film, the action in this scene might take between 20 to 25 seconds. The original was executed using artist colour acrylics on bainbridge board. The Phantom was traced and painted onto a clear cel as a separate piece of work."