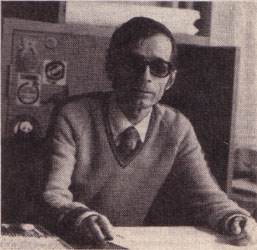 Özcan Eralp is one of the true veterans of the Swedish production of Phantom comics. He was born 1925 in Izmir, Turkey and first studied to become an engineer. However, he dropped out after getting a job at a newspaper. In 1960, he began to work as a commercial artist and has also worked with animated film.

In 1967 he travelled to Sweden to visit his brother who lived there. The visit became longer than he first planned, and after a few months he started to look for work as an artist, and eventually found his way to Semic Press. His first job was simple studio work such as drawing speech bubbles. After a while he also started to assist artist Torsten Bjarre with inking on the very popular Lilla Fridolf comic strip. Sometimes, when Bjarre was ill, he even ghosted entire episodes on his own. (Note: Hans Lindahl is another Phantom artist who would later draw Lilla Fridolf, between 1990 and 1994). 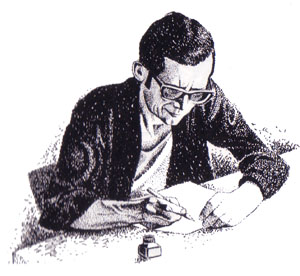 Eralp's dream however was to draw the Phantom, which he had been a fan of ever since he saw the old Tom Tyler serial in Turkey in the 1940s. Ebbe Zetterstad, then editor of Fantomen, first laughed at Eralp's aspirations but less than a year later his dream came true. At first, it was only a matter of drawing extra panels to improve the Italian stories obtained from Fratelli Spada. His first work on the Phantom was published in Fantomen Nr.2/1968, where he had done additional art in a story drawn by Germano Ferri. In the splash page for this story, the top panel was created by Eralp while the two smaller panels at the bottom were by Ferri. After a few years, Semic decided to increase the production of their own Phantom stories, and Eralp got the chance to draw his first complete Phantom story. The Treasure Seeker in Fantomen Nr.4/1970 was both written and drawn by him. Eralp would continue to write or co-write several stories over the years.

Most of his stories from 1970-72 were remakes of old Lee Falk newspaper stories. Unlike more recent remakes, these were not so faithful to the original -- apparently the idea was to make them seem like a brand new story. The panels below show Wilson McCoy's Oogooru and the Witchmen compared with Eralp's redrawn version for Fantomen Nr.8/1970 (the small initials ÖE appear the bottom-right corner, but are not clear in this small image). During this period, Eralp also redrew three short stories originally published in Charlton's Phantom magazine.

By the time Ulf Granberg became editor of Fantomen and the Swedish production of Phantom stories really took off, Eralp had already returned home to his native Turkey and the city of Istanbul. It was in this exotic environment that he created the artwork for the memorable "cowboy stories" (three stories about the 17th Phantom in the Wild West; Terror in the Desert, Wagon Master and The Indian Hater) and - of course - Intrigue in Istanbul!

In 1976, Eralp and Swedish veteran Bertil Wilhelmsson began to work together with Wilhelmsson pencilling and Eralp inking. The result of their cooperation was often described as being better than when they worked individually. They made several memorable stories together, such as Lethal Dose, The Tyrant in Tiang and Grand Prix, after which Wilhelmsson left the Phantom comic for a few years. A typical example of their collaborative artwork is shown HERE, taken from the 1977 story The Tyrant in Tiang (not published in Australia).

Eralp remained an important and reliable cornerstone for the Semic production of Phantom stories throughout the 1970s and into the 1980s. One of his own favourite stories, which also became very popular with the readers, was Guran's Secret from 1985. Guran featured with the leading role in another of Eralp's stories, The Old Bandar in 1987.

Besides working on the Phantom, Eralp also did colour illustrations for various Turkish magazines. In the early 1980s he won a short story competition, but since he was working for the magazine that held the competition he entered under the name of his wife's sister. Naturally, he won and his wife's sister was perplexed when she received offers to write novels! In the mid 1980s he also finished his first novel, a mostly autobiographical story. It is not known if the novel was ever published. 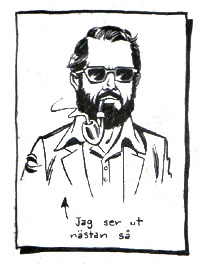 When working on a Phantom story, Eralp would first pencil out the story in a small format in caricature style to decide the layout. After the page layout is done, he would pencil the story in full size (about 460mm x 350mm) and ink as he went along through the story from start to finish. He enjoyed inking other artists' work almost as much as doing own stories, and in 1986-88 he once again teamed up with Bertil Wilhelmsson (and Knut Westad, but only for one story before Westad left the Phantom).

Caricatures is something Eralp enjoys, and it is no surprise that he cites Lucky Luke artist Morris (Maurice de Bévere) as one of his inspirations. Eralp sent the self portrait on the right to Ulf Granberg before a meeting in Copenhagen in 1979: the Swedish text says "I look almost like this." Eralp was fluent in Swedish and received many of the scripts in Swedish.

In his 1989 story The Secret of the Volcano Valley (which he also developed the plot for), Eralp experimented by leaving some panels in pencilled form rather than inking over them. The effect was remarkably beautiful, as shown in the example panel below. 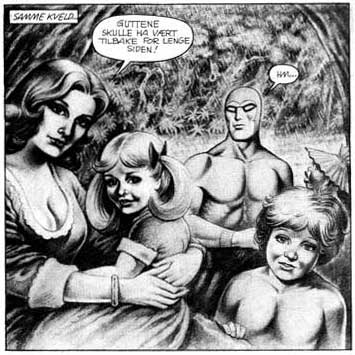 Another memorable work by Eralp was the Map of Bengali, a giant painting that was published as a poster in Fantomen in 1984. It was officially sanctioned by Lee Falk and has served as the model for all maps of Bengali in Semic/Egmont stories since. It can currently be viewed online here.

In 1991, Eralp's last Phantom story was published, his only one made for colour publishing. The splash page from this story can be viewed here.

After more than 20 years and an admirable amount of work on the character he loved more than any other, Özcan Eralp certainly qualifies as an integral part of the Swedish Phantom production and contributed greatly to the success of Fantomen.

Index of Özcan Eralp's Phantom stories
Eralp's first work on The Phantom was to prepare additional art for stories originally created in Italy. The stories were often largely rewritten (by Janne Lundström and Magnus Knutsson for example) both to improve the storylines and to make them longer, and in some cases to combine two Italian stories. It was Eralp's job to redraw parts of these stories, as well as draw some completely new scenes, all while mimicking the original artist's style as much as possible.

After this, Eralp got the chance to draw Phantom stories all on his own. Although some of them are based on American stories, the artwork is completely new unlike the Italian stories above. The Team Fantomen story number is shown in the first column. Only a handful of these 76 stories have been published in Frew's Phantom comic, with the issue numbers indicated in the last column.