The First Print: The 14th Phantom 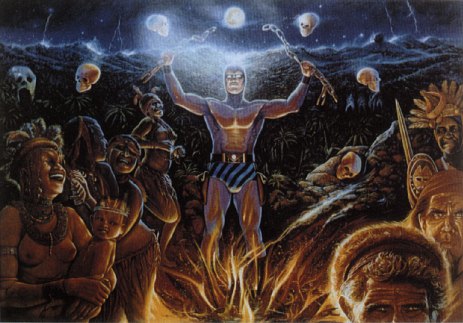 The first piece of art work is by Birgitte Hansen, the foremost female realist, from Denmark who presently resides at Newcastle.

Birgitte was inspired to create her portrait after being presented with a mountain of Phantom comics which she read in two days. From this "saturation" Birgitte decided to depict the story of the 14th Phantom because of its potential to explore contemporary themes of freedom, paternity and fantasy.

When looking at the painting from left to right we have on the left hand a tribal group with the characters dancing and laughing with joy - they and their children have been forever set free from slavery. All the costumes, headgear, weapons and ornamentation are authentic down to the beads and feathers.

This portrait is a glorification and celebration of freedom, parenthood and childhood.

The orbit of skulls reflects what happens when The Phantom strikes; as Birgitte says, "every time he punches, skulls fly every which way." These skulls combined with the moon form a halo around The Phantom giving him the aura of immortality (an intrinsic element of the mythology as bestowed upon him by his creator Lee Falk).

This portrait of the main character is based on a study of the story of the origin of the Phantom as written by Lee Falk and beautifully rendered by Sy Barry. The statue in this episode is identical to this pose. The concept comes full circle - the Bandar natives who originally rescued the first Phantom were freed by him when he took on the persona of the god of their masters. Now, again some 13 generations on, history repeats itself.

Freedom is symbolized throughout the painting by broken chains; on the wrists and necks of the natives, in the fire and finally in the act of breaking them above the Phantoms head. The light of the moon over the tree tops in the valley reinforces the "explosion" of the chains snapping.

The fire itself becomes a metaphor for a crucible - a testing of "mettle" of the people whilst the weapons of enslavement and aggression are purified by the heat. Thus the smoke of slavery is transformed into the water of freedom flowing from the stream of life.

Another native on the right hand side, again in full and an authentic costume, is driving out the last two slave traders. These now usurped "masters" both wear the indelible mark of The Phantom. Obviously they have faced his wrath. The slavers with the symbol of water behind them have themselves undergone a type of rebirth albeit not of their own choosing.

The heavens as well are charged with bolts of lightning.

The whole painting in all its detail and authenticity retells the classic story in a realistic yet fabulous genre. Truly a work of art capturing real people, real emotions within the drama of creativity. This creative element is evoked firstly by Birgitte the artist (in the act of creating the painting herself), and then secondly recreated by the characters within the artwork (in their traditional means of self expression namely song, dance and the wearing of colourful costumes). These aspects all combine to tell the tale of the 14th Phantom who ended the slave trade of the Eastern Dark as recorded by the original author Lee Falk.