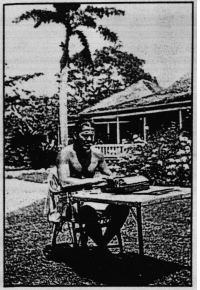 Lee Falk, like the characters he created, has been a world traveller, who has visited Europe, China, Japan, India, and South America. He has used all these journeys to generate ideas for stories. Somehow he managed to keep up with writing his scripts for Mandrake and The Phantom -- even if it meant taking his work with him. The photo on the right shows Falk at work at Nassau.

Lee told a funny story about the subject of his travelling: "As soon as I began writing Mandrake for King, their publicity department requested a biography from me. Up until that point, I hadn't done much of anything except grow up, so I manufactured a great tale to satisfy them. I wrote that I was a world traveller, that I had met with the magicians of the east and had been initiated into all their mysteries, etc.

"In reality, I'd just been in Missouri and Illinois - and that's about it. But when I came to New York, most of my friends turned out to be in the newspaper business, so I began to know foreign correspondents. They were a very glamorous bunch, the stars of the newspaper world. In those days, people didn't travel very much, so the foreign correspondents were like movie stars. Naturally, these men had travelled a great deal, and they soon read about Lee Falk, world traveller, in King's publicity releases.

"They began to tell me about that little restaurant in Venice, or that great bistro in Paris, expecting me, of course, to regale them with stories of some of my own favourite hangouts abroad. Naturally, I had to bluff my way through these sessions, so I began to travel in order to catch up with my own autobiography! I travelled and travelled and finally caught up with my bio, and even went ahead of it. Believe me, this is a true story! Finally, the King publicity department sent out releases telling the truth about my original bluff and how I resolved it."

In the early 1970's, Lee Falk was approached by Avon Publications with an interest in producing a series of Phantom novels. &quotThey wanted me to write a novelization of the strip every two months! At that time, I was not only doing both strips, but I was very active in the theatre. I had five of my own theatres, some of them with stock companies, and I was writing and directing plays. I told them I could do the first one. I took one of my stories and wrote about The Phantom's trip to Missouri as a boy to become educated, and how he had to return to the jungle to take over as The Phantom. Then they got some other writers, and I gave them proofs of my original stories, and they wrote some of them up. Every six months I would do one myself, so in the course of a few years, I did five. I'm rather proud of them, worked hard on them and I think they're rather good. I was very disappointed in the others. I gave them the stories, but they did a hack job. I told them to take my name off them. If it's good, I want credit - but if it's lousy and I didn't write it, I don't want it."

This requirement to provide author credit eventually caused the demise of the Avon novel series. The book which was to become the last in the series, The Curse of the Two-Headed Bull (#15), was written by Lee Falk. However, in early printings, the author credit was given to Carson Bingham. This incensed Falk and he instigated legal action against Avon. A second edition of the book was produced in which Falk was given appropriate credit as the author, but no more books were subsequently written for the series. 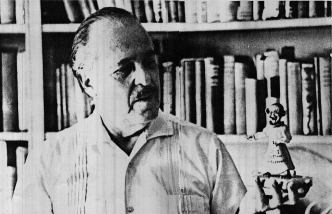 Lee Falk received a special "Yellow Kid" award (shown above) at the 1971 Comics Conference in Lucca, Italy, and has received many other tributes during his long career. "I was in Rome three years ago and was presented with their Lifetime Achievement Award by their Minister of Culture. They held a big press conference because the award had never been given to a cartoonist or anybody in the cartoon world. It had previously been given to people like Federico Fellini and the mayor of Paris. From there I went on to the big comics festival in Lucca where they made a very big deal out of the award because they felt it elevated the whole field of cartooning."

In May 1994, he was honoured by his hometown St. Louis, with his very own Lee Falk Day. &quotI was in town for a comics conference," he explains. &quotI have a slide show called The Golden Age of Comics, which includes pictures and the history of comics from the Yellow Kid in 1895 up to the strips of the 1950s such as Peanuts. At that slide show, they announced that I was being honoured and presented me with a beautiful certificate, which I have in my home."

"Writing plays is a very definite craft - it's like building a cabinet - you just don't write it, you've got to know how to build it. You have to know about entrances and exits, how a scene works, how lines sound, etc. And I think the art of writing a comic strip is closer to the theatre and to film technique than any other kind of writing I know. When I do my stories for Mandrake and Phantom, I write a complete scenario for the artist, in which I detail the description of the scene, the action and the costumes. If new characters are being introduced, I write their descriptions and the dialogue for each panel. With such a scenario in front of him, a cameraman could take this and shoot it or an artist can take it and draw it.

"The first thing you have to do is to get a good story and the only way you know whether you have a good story is if you like it yourself. Strips like these are read by all kinds of people all over the world and you couldn't possible know what would please or displease all of them. I have to follow my own taste because there's nobody else around, and I don't go to a lot of people for opinions because I'd get too confused. I've found that if I'm getting bored with a story, it's time to cut it off pretty fast. Of course that's not always true - sometimes the stories I like the best are not favourites with readers - but generally I try to please myself. I've raised three children and I used to try out stories on them - I could tell when their interest was flagging that the story was getting boring.

"Each artist, out of his own interests and imagination, creates his own world in his strip - this is true of Peanuts, Beetle Bailey, Popeye, all good strips. And you accomplish this not by imitating others - you come up with your own idea. To me, The Phantom and Mandrake are very real - much more than the people walking around whom I don't see very much. You have to believe in your own characters.

"We don't discuss sex -- religion and politics is very minimal. My only politics is up with democracy and down with dictatorships. Down with human rights violations. Down with torture. This kind of thing which I do in both strips. So there's no complaint about it. I don't go into anything like Doonesbury, although I think he's very clever, but that's not my stuff at all. My feeling is that they belong on the editorial page and a comic strip to me is pure entertainment.

"I can't write a story for Mandrake that The Phantom could do. Mandrake is stiffer, elegant. The Phantom is a very easy, laid back guy. He may look like an unusual person with the Skull Cave and the mask, but he's a very normal man who happens to be a super-athlete. When you shoot him he hurts and when you hit him he falls down, and so forth. He has a good sense of humour and Mandrake has sort of a sense of humour but he's a little more formal. These are very strong men and I feel that I'm the chronicler who's writing down their adventures and they go ahead and do what they have to do, which is kind of an odd idea, but I sometimes feel that they're going their own way and I'm just writing it down. Just as the Phantom keeps his own chronicles in the Skull Cave, I keep the chronicles of both of them."

The Last of His Kind

Lee Falk died of congestive heart failure on the morning of 13 March 1999 at 4:30am, six weeks before reaching his 88th birthday. He spent the last years of his life in Upper Manhattan, New York, and had a summer house on Cape Cod, called Xanadu after the poem "Kubla Kahn" by Coleridge (one of his favourite poets). He was a long-time tennis player, and enjoyed the theatre, opera, and ballet. Other hobbies included astronomy and politics. He is survived by his third wife, Elizabeth (nee Moxley), his three children, Valerie, Diane and Conley, and several grandchildren. Phantom fans will recognise some of those names from characters in Phantom stories!

Lee continued to script both The Phantom and Mandrake the Magician right up until his last days. He was literally the last, active comic strip creator whose work survived from the 1930s into the 1990s. It can truly be said that Lee's accomplishments equal those of the classic characters he created. He will be sorely missed ... but fondly remembered for the wonderful legacy of adventure stories he has left us.