The Fourth Print: The 22nd Phantom 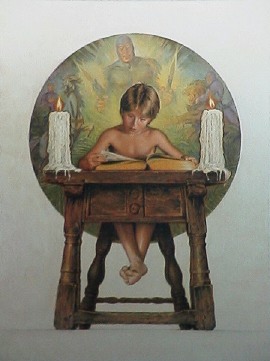 Paul Newton is a regular entrant for the hotly contested Archibald Prize for portraits, held annually in Sydney since 1922. The Archibald Prize sees hundreds of artists each year submit their work in the hope of being one of the 30-odd entrants to be hung -- let alone win the Aus$35,000 first prize. For the 1999 Archibald, Paul entered portraits of Maggie Tabberer (short-listed), and Bryce Courtenay. In past years he has entered portraits by other Australian celebrities and public figures, such as radio-announcer John Laws (Packing Room Prize in 1996), super-model Kate Fischer (short-listed in 1997), eye surgeon Dr. Fred Hollows, former Prime Minister Bob Hawke, media personality John Doyle, and Governor-General Sir William Deane.

The painting shows Kit, the son of our current Phantom, seated at a desk, reading from the Phantom chronicles. Behind him, ethereal images of past Phantoms with guns blazing, swords flashing, are swirling around him. Kit reads about his forefathers yet sees the adventures that await him. A wide-eyed wonder on the youngster's face shows acceptance as well as youthful embracing of his fate. The painting has a very special significance to Dietmar, not only because his son Louis was the model for Kit, but also the theme of the painting is a strong reminder of his own boyhood experiences with reading Phantom adventures.

This exquisite oil painting, charged with wonder and excitement, perfectly captures the world of words brought to us by Lee Falk. An absolutely beautiful piece, of which the attached digital photos are very poor copies.